Rapid development and urbanisation is increasing energy demand in Mongolia. The country’s energy demand is expected to double within the next twenty years. Mongolia does have over 150 billion tons of coal resource, but it also has a tremendous amount of wind and solar energy resources. Utilisation of renewable energy is essential to meet this growing demand in a sustainable way. The Government of Mongolia is aiming to have renewable energy share as 20% and 30% of the total energy mix by 2020 and 2030 respectively.The Salkhit wind farm was the first ever grid-connected utility size wind farm established in Mongolia. It consists of 28kms of overhead transmission lines, and 31 wind turbine generators each with a capacity of 1.6 megawatts. It was truly ground breaking work. The first private investment in public infrastructure, the first private power project, the first wind farm and moreover, represents the ability for Mongolia to use its resources in an efficient, sustainable way for the future of the national economy.Murdoch alumnus Khishigt Tamir (Post Grad Dip Energy Studies 2011, MSc in Renewable Energy 2012) returned to Mongolia to work on this pioneering project and subsequently worked on establishing the Tsetsii wind farm in the Gobi desert.We caught up with him to find out a little more.

How did you get started in the industry?

After returning I could not resume working at my previous position at the Energy Regulatory Authority because the Chairman and Regulators were replaced by new people and the only available position was in the Administration Department which was not dedicated for an engineer. The only possible way for me to work in the renewable energy field was to work in the private sector. I started working at Newcom Group which is a pioneer in RE development and planned to construct its first wind farm from January 2012.

Where are your wind farms located? 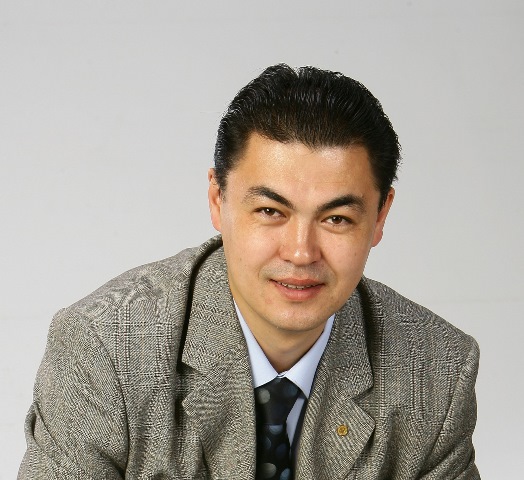 How difficult was it to get them constructed and operational?

Generally, Mongolia has a harsh continental climate (with a hot summer of plus 40oC and cold winter of minus 40oC) with a short warm season and longer cold season. The period suitable for doing construction work is only about 6 months of a year. Therefore it requires having very good management and proper planning protocols otherwise the construction period can be extended by up to two years.It was a real challenge for us when the first wind farm was constructed. We had to hire an experienced foreign contractor (Leighton) to do the design and construction work of the BoP (Balance of the Plant) works. The turbine supplier (General Electric) was responsible for transportation, installation, assembly and commissioning of the wind turbine generators. We learned many things in the engineering, financial, economic and legal fields. Our shareholders were renowned international organisations (EBRD, Nordic Development Fund, General Electric and Newcom). We have implemented this project by fulfilling a world-class level requirement for the Lenders. As RE technology was a new technology in Mongolia, there were many difficulties in almost all fields – technical (grid interconnection), financial (applying Feed in Tariff), and legal (establishment of a new Renewable Energy Law and the first ever signed Power Purchase Agreement).If you want to see a documentary movie about the Salkhit WD project you can see it here:https://www.youtube.com/watch?v=aygmUfsEi6UThe second project was a little bit easier than the first one. However, it was still very challenging due to the distant location of our project site and connecting to an almost end point of the grid. It is the very first demonstration project to utilise the available wind energy resource in the Gobi Desert area. There is a concept called ‘Asian Super Grid’ which aims to establish a big continental grid by interconnecting power systems of neighbouring countries China, Japan, Korea, Russia and Mongolia. It is actively engaging in conducting feasibility studies for this project with a purpose to utilise the vast amount of RE resource available in the Gobi Desert region in North East Asia to power Asian countries by clean electricity generated from RE resources and to reduce the emission of greenhouse gases. We implemented this project with Japanese SoftBank Energy Corporation, which is the first initiator of the Asian Super Grid concept. In this project we had two international Lenders (EBRD and JICA – Japan International Cooperation Agency), Owner’s engineer (Wood Group – formerly Sgurr Energy) and the Engineering Procurement and Construction contractor Vestas – a world-renowned wind turbine manufacturer.

Did you have to work with specific business partners and regulatory bodies?

I worked at the Energy Regulatory Authority of Mongolia from January 2006 until January 2009 at various positions – Foreign Relation Specialist in the Legal, Information and Administration Department, Specialist in charge of Generation Licensees in the Licensing Department and Head of the Legal, Information and Administration Department at the former Energy Regulatory Authority. Renamed the Energy Regulatory Commission in 2012, the ERC is an independent body mainly responsible for issuing licenses for all kinds of energy activities, approving tariffs for generators, transmission companies, distribution and supply companies, and retail tariff for consumers and protecting the rights of both licensees and consumers.

What other works have you done besides the wind farm projects? 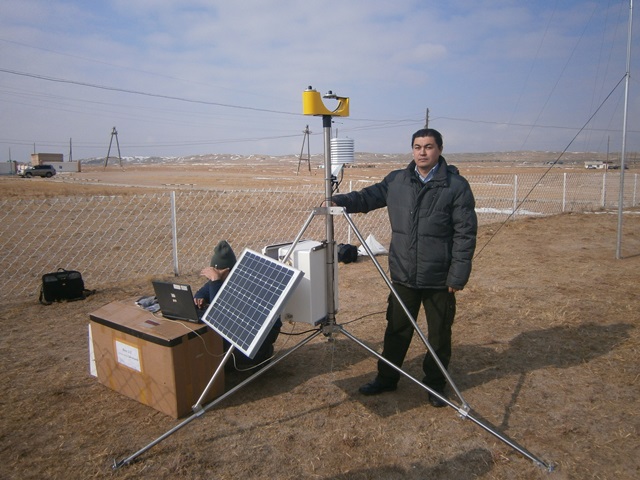 I worked at Mon-Energy Consult for about two years as a renewable energy consultant. We conducted a feasibility study for establishing a Solar Thermal Power Plant (internationally called CSP – Concentrated Solar Power technology) in Mongolia. Concentrated Solar Power plants have been widely constructed and used in the USA, Spain and several other countries. Mongolia does have a good resource of DNI – Direct Normal Irradiance, which is mainly used in solar technology. However, Mongolia did not have DNI resource information available and the harsh continental climate of Mongolia makes it difficult to protect the heat transfer fluid from coagulating or freezing in a cold winter season.I also actively participated in developing some important documents for the energy sector such as a Renewable Readiness Assessment conducted with the support of the International Renewable Energy Agency (IRENA) for the future development of renewable energy in Mongolia. Moreover, I also had the opportunity to work on a project – “Updating the Energy Sector Development Plan” which was the main strategic document to be followed for developing the energy sector of Mongolia for the next 15 years. So I have been very busy for 7 years after my graduation at Murdoch University!One surprise was one day I suddenly received an offer from an organisation called Scholars’ Press located in Germany. They told me that my Master’s dissertation was rare study material which could be useful to many experts working in the RE field. Therefore they decided to publish it as a book. I accepted the offer and my dissertation was published in Germany several years ago. In the dissertation I tried to consider all relevant technical, commercial, administration and practical issues related to design, installation, commissioning, operation and maintenance of stand-alone RE systems, which have been installed at the centre of 12 ‘soums’ (rural towns) in the countryside. 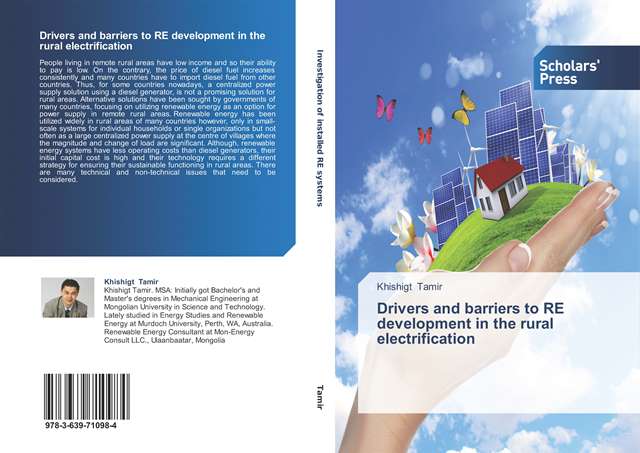