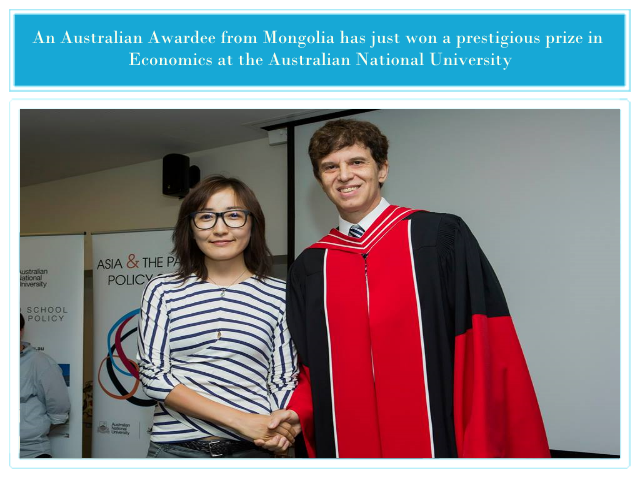 Ms. B. Tsendsuren, who commenced her Australia Award study for a Master of Environmental and Resource Economics at Australian National University in January, 2014, won the Helen Hughes Graduate Diploma Prize, achieving the highest results among all other scholars studying Economics at the Crawford School of Public Policy of Australian National University.
When she was studying in an undergraduate course of Economics at Hacettepe University in Turkey, Ms Tsendsuren became more interested in environmental economics, as she believed that it was the most challenging issue for Mongolia. After completing a BA degree, she joined the Ministry of Environment and Green Development of Mongolia, and worked in an area of clean development and climate change issues for four years.
Ms Tsendsuren said: “I chose a Masters in Environmental and Resource Economics because I had a plenty of experience with the Ministry in that field; I also found that very few environmental and resource economists can provide professional support and advice on efficient and effective use of the huge natural resources in our country, yet with a balance of keeping the wilderness and natural beauty of the nature in Mongolia”.
Thanks to her Australia Awards Scholarship, Ms Tsendsuren had an opportunity to study at one of Australia’s most prestigious universities and to focus only on her study. She noted that her classmates, her lecturers, and the favorable learning environment and facilities helped a lot in her achieving this special and distinctive prize, which is provided to the best student every year since 1993.